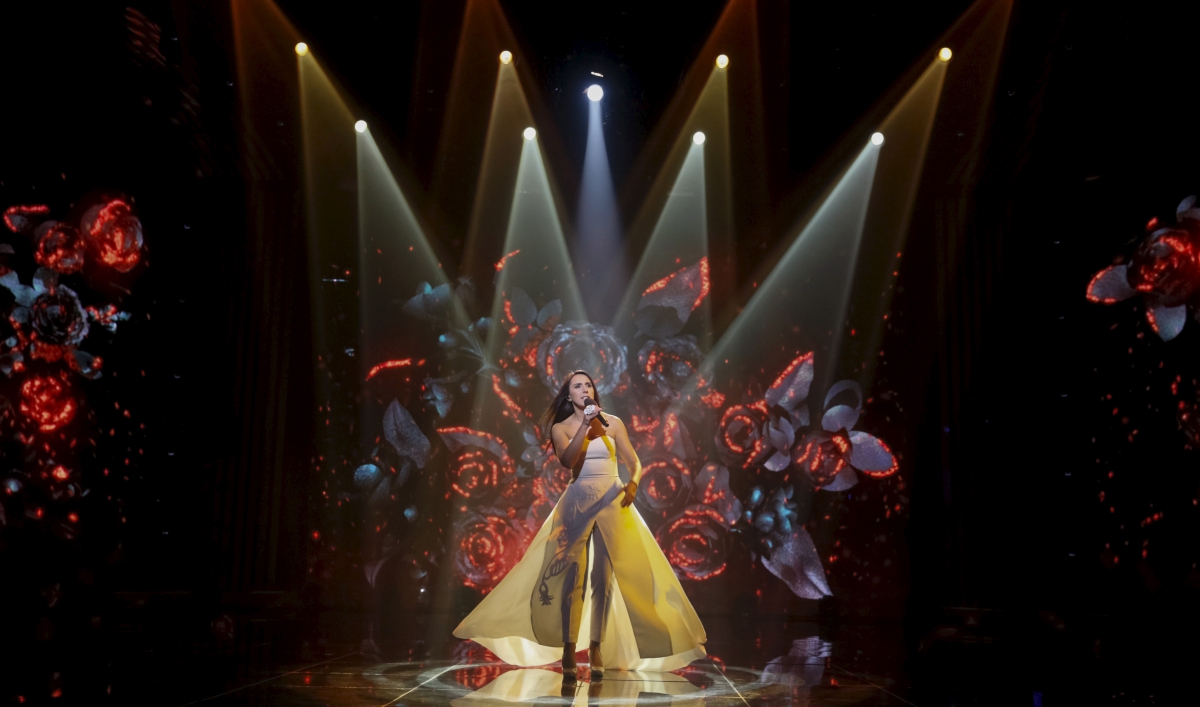 A song of deportation and death instead of schmaltzy ‘mio schmio.’

KIEV — The last time Jamala made it to the finals of Ukraine’s national competition for the annual Eurovision Song Contest, five years ago, it was with a light, almost painfully enthusiastic piece of pop cotton candy, appropriately called“Smile.”

In the official video, she is seen cavorting in a cartoon landscape, with cartoon birds flitting about,a polka-dot dress and a fixed grin stretched across her face. Despite her painful optimism, however, she was not chosen as Ukraine’s entry.

This year she’s had more success: Last month Ukrainian voters picked her to represent the country in the competition. Only this time, she wasn’t smiling.

Her entry, called “1944,” is a much more somber composition, with a haunting Turkic “mugham” motif as part of its melody, which tells the story of Joseph Stalin’s forced deportation of some 250,000 Tatars from Crimea in May 1944 to the Central Asian steppes, on charges of alleged collaboration with the Nazis.

“I had to write about what happened” —Susana Jamaladynova, singer

More than just a serious song, this is Jamala’s own story. Her father’s family was among those expelled, and its members were among the tens of thousands who are believed to have perished as a result. (Some estimates say that as many as half of those deported died.)

One was her great-grandmother’s infant child, whose body, she says, soldiers then tossed from the train. Jamala, whose original name is Susana Jamaladinova, was born in the southern Kyrgyz town of Osh — 4,000 kilometers from Crimea. Her family, like many other Tatars, returned to Crimea during the late 1980s Perestroika era, when the Soviet Union began to liberalize.

“Why 1944? Because every fragment of our family histories came from what was passed down from the deportation,” she said during a recent interview with POLITICO over lunch in a hip Kiev restaurant. “I wrote this song most likely to free my soul, free my heart. Because the stone that lay on my chest for all my 32 years was so heavy, that I had to write about what happened.”

Her lyrics are full of barely contained rage: “When strangers are coming/They come to your house/They kill you all/And say, ‘We’re not guilty.’”

“You think you are gods/But everyone dies,” she sings.

Russian officials were also less than jubilant — not so much because of the dark subject matter, but rather because they have interpreted her song as a musical attack on the Kremlin.

Kiev and Moscow have faced off militarily, economically, diplomatically and politically, ever since unmarked Russian troops helped seize what was then Ukrainian-controlled Crimea in February 2014.

Now, the dispute over Jamala’s work threatens to turn this year’s song contest — better known as a feel-good kitsch fest with camp performances and over-the-top costumes — into the latest battlefield between Kiev and Moscow.

The choice of Crimea as the focus of Ukraine’s entry is an intentional “provocation” from Ukraine, Russian officials say. “Its contestant is to present a song that has a clear anti-Russian and political subtext,” said Vitaly Milonov, a hardline Russian MP.

Jamala denies there’s any political message — anti-Moscow or otherwise. She says the song is “historical.” Eurovision organizers, who ban any political content, agree with her: Her song was accepted for the semi-finals in Stockholm on May 11.

Historical or not, though, the song will undoubtedly re-focus attention on Russia’s annexation of the Crimean peninsula.

Although Crimea has for the most part fallen off the international news radar, Kiev has said it will never accept Moscow’s takeover the region, or the corresponding seizure of Ukrainian businesses and assets.

Last year Crimean Tatar and Ukrainian far-right activists joined forces and set up an “economic blockade” of Crimea, establishing check points at the main crossing points on the Ukrainian side of the border. The activists allowed individuals to pass into Crimea, but prevented trucks and cars from carrying what they considered too many goods or produce.

At the same time, unknown individuals blew up the main power lines by which Crimea receives electricity from Ukraine, plunging the region into darkness. Electricity has been only partially restored.

Since the Russian takeover, which the international community has overwhelmingly refused to recognize, watchdog groups also say civil liberties and human rights have deteriorated drastically.

In particular, they say, the Crimean Tatars — a quarter million of whom live on the peninsula — have suffered. Newspapers and TV channels have been closed down. Hundreds of people from their community have been arbitrarily searched, detained, jailed or have disappeared — punishment that activists say is meted out to the Tatars for their general opposition to Russian rule.

This month, a Crimean court will hear a case whether to outlaw and classify as an “extremist organization” the main Tatar representative body, the Mejlis. If the suit is successful, some 2,500 Mejlis members will find themselves under threat of arrest.

“The situation couldn’t be more serious,” wrote Sevgil Musaieva-Borovyk, a Crimean Tatar and editor-in-chief of Ukraine’s main news website, Ukrainska Pravda. “This could lead to total fear, where tens of thousands of people will be forced to flee the peninsula.”

For many Ukrainians, then, Jamala’s song is unquestionably political, and this they say is exactly why they voted for her in the national competition. “I cried when I heard it,” said Layla, a Crimean Tatar in Kiev who asked not to give her last name. “Yes, it’s political, but [Russian President] Vladimir Putin made it political with his actions. Otherwise it would be just the story of her family.”

“I wanted an unusual song for Ukraine at the competition, because we find ourselves in an unusual situation” — Jamala

Jamala faces definite risks with her composition, though, since her entire family still lives in Crimea. She says she visited them last in the summer of 2014; now she’s afraid to go there. “I don’t want to tempt fate,” she says. “Distrust of the new authorities isn’t baseless. They can say or do anything they want.”

She is afraid for her relatives. “It’s so frightening even to think what could happen. What could I do if someone were to do something to them?” But, she says, so far it’s only locals and acquaintances who have criticized her to her family — officials have not expressed any reaction.

But there is no question that she could stop performing “1944,” which she says is personally the most important song she’s written. “It’s my ‘Strange Fruit,’” she says, referring to jazz singer Billie Holiday’s searing description of a black lynching in the segregated American South. “I’ve never had a similar song in my repertoire — and there won’t be many more like it for me.”

She acknowledges that perhaps the song is not very similar to the other entries at the Eurovision Song Contest, usually a showcase for upbeat, sometimes mindless, compositions. “Mio, mio, schmio, schmio,” she says, laughing, in imitation of their style.

“I wanted an unusual song for Ukraine at the competition, because we find ourselves in an unusual situation,” says Jamala.