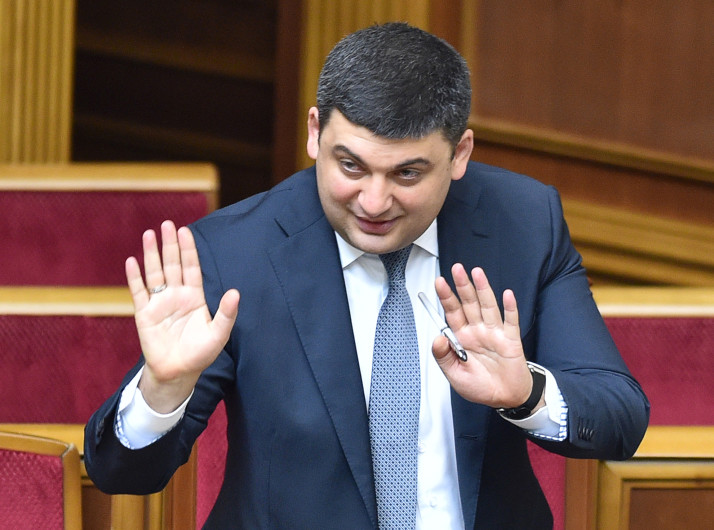 KIEV — Ukraine got a new government Thursday, but the debilitating political crisis is likely only taking a short breather before the next round of confusion.

Ukraine’s parliament easily approved Volodymyr Groysman, a close ally of President Petro Poroshenko, as prime minister — but the crucial votes needed to win a parliamentary majority came thanks to MPs and parties linked to the country’s oligarchs.

It only took a few minutes for signs of potential trouble to appear. After first approving Groysman and then his cabinet, it took three tries to get a parliamentary majority to express support for his new government’s program.

There was also tension between 38-year-old Groysman and Poroshenko when it came to filling the slots in the new cabinet. In the event, Groysman’s new team has few internationally known reformers.

The biggest absence is Natalie Jaresko, the American-born former finance minister, who had enormous credibility with the International Monetary Fund and Western lenders crucial in supplying the financing to keep Ukraine’s battered economy afloat.

Groysman — who got his political start as mayor of the western city of Vynnitsa, Poroshenko’s home town and base of his confectionary fortune — started with a promise to try and break with the corruption and insider dealing that has driven Ukraine’s Western allies to distraction and its people to despair. Ukraine’s political disarray comes a time of growing worry that the war with Russian-backed separatists in eastern Ukraine is heating up again.

“I understand the threats we are facing,” Groysman said in speech before the vote. “They are corruption, inefficiency of state governance and, dear colleagues, populism, which is as big a threat to Ukraine as the enemy in the east of our country.”

He also gave assurances that Ukraine would abide by financial conditions set down by the IMF. If true, this will be welcome news to Ukraine’s western supporters, who have withheld billions of dollars in assistance until a new government was formed and its economic course made public.

Groysman, formerly the speaker of parliament, emerged as the top candidate weeks ago, during the protracted deadlock that followed parliament’s failed attempt in February to pass a no-confidence vote to dismiss Arseniy Yatsenyuk, his deeply unpopular predecessor.

When Yatsenyuk eventually tendered his resignation on Sunday, Groysman’s appointment appeared to be assured, given that Poroshenko and the other political actors had weeks to prepare. But getting Groysman into office ended up being fraught with difficulties and delays. First there were glitches in forming a new parliamentary coalition, which was needed after the previous one disintegrated in the wake of the failed no-confidence vote. This was accomplished Wednesday, after intense negotiations.

The new coalition is a highly fragile creation, made up only of Yatsenyuk’s and Poroshenko’s parties, who, when it came time to vote for Groysman’s appointment, could only provide 206 of the 226 votes needed for a majority. What’s more, they had to rely on help from other parties, including the Renaissance Party of billionaire Ihor Kolomoisky.

“Nothing. I don’t even know him” — Vladimir Putin

This fragility could complicate important pieces of parliamentary business, like unpopular reforms or a controversial amendment to the constitution that is supposed to cede more autonomy to the breakaway regions in eastern Ukraine — one of the conditions of the Minsk ceasefire that is supposed to find a way of ending the war with the separatists.

“Poroshenko and his party will now carry the bulk of responsibility for the performance of the government, while depending heavily on parliamentary deal-making to get anything done,” said Olivia Dhand, an analyst with Teneo Intelligence, a consultancy, adding that the composition of the new cabinet will “likely be a disappointment for investors.”

There are also questions over Groysman’s ability to take on the oligarchs and entrenched governmental interests. Groysman is no stranger to insider deals and nepotism, critics say, pointing to the fact that he was made head of his father’s company at 16.

Poroshenko, a billionaire, is part of the class of oligarchs that has controlled Ukraine since the collapse of the Soviet Union. He was named ed in the Panama Papers, which suggested that he had used a Panamanian company to shelter his assets.

Groysman will also face foreign challenges. Ukraine was shocked by the outcome of the recent Dutch referendum, where voters rejected a new trade deal between Kiev and the EU.

The other potential difficulty is signs of friction between Poroshenko and Groysman. According to reports, the two men clashed over who would be appointed to key posts in the cabinet.

Some saw this as a sign for optimism — Groysman was asserting his independence, they said, instead of being a Poroshenko yes-man. Others see a risk of continued dysfunction between the presidency and government that destroyed relations between Poroshenko and Yatsenyuk.

“The split in relations between Poroshenko and Groysman will only deepen,” said commentator Taras Berezovets.

Much will depend on the performance of individual ministers — and here there are a number of concerns. Yatsenyuk’s People’s Front party has managed to hold onto several posts. Moreover, some significant positions have been allocated to members of the president’s circle.

Although the new cabinet isn’t especially reformist, there are hopes it could enact changes in key areas like electoral law or the privatization of state enterprises, in order to decrease the scope for corruption.

Muddling through may be the best Ukraine can hope for, because if the coalition collapses it would have to call early elections — a prospect feared by unpopular incumbents who could lose their jobs and Western capitals worried about instability.

“The next prime minister will be held hostage by the president’s strategy of half-hearted reform and temporary compromise with oligarchs and members of the old political system, which hinders the fight against corruption and slows economic growth,” wrote Piotr Kościński and Daniel Szeligowski of the Polish Institute of International Affairs.

This article has been amended to clarify the number of deputies from Yatsenyuk’s and Poroshenko’s parties who voted for Groysman’s appointment, which was 206.